There is not better medicine for the heart chakra, than love.

Motherhood does not have to be the only experience that brings women that blissful feeling, but it certainly transforms our lives.

The day I was notified I would become a mother, I was very young and It became a shock full of fear and anxiety

Because we women actually have into our body the responsibility of feeding (from our body) during 9 months of pregnancy with uncertainty of how painful would be to deliver a new human being into this world.

Also about how to contribute to humanity with future resource, with zero skills of how not to mess up and prevent that from happening as such.

I was only 21, back in that moment. Everyday I would ask myself 🤔Will I be a good mom?

I was so worried, about that. Then I realized, there is no perfect parenting style.

Babies do not arrive with a book of instructions.

I also realized later on that there is a perfect medicine able to cure any doubt, resentment, heart break or adversity during this life’s University, it is called love.

Love teaches patience, forgiveness, compassion. It makes us better human beings because when a son or daughter undergoes struggle, we won’t hesitate to bend on our knees requesting guidance and help for them to overcome the struggle, without longer suffering and later be able to move on.

We connect and reconcile our relationship with the Lord.

We learn about gratitude.

Just for that maternity is the most precious and valuable gift of love.

If could be through adoption or even pet owning but the truth is that once we experience this holy grail called maternity’s love there is a metamorphosis within the chamber of our heart.

I will share a poem written by Renee R. Vroman, I found 20 years ago and became my manifesto during this eternal motherhood.

It was a warm summer day when the gods placed it in her hands.

She trembled with emotion as she saw how fragile it appeared.

This was a very special gift the gods were entrusting to her. A gift that would one day belong to the world.

Until then, they instructed her, she was to be its guardian and protector the woman said she understood and reverently took it home, determined to live up to the faith the gods had placed in her.

At first she barely let it out if her sight, protecting it from anything she perceived to be harmful to its wellbeing; watching with fear in her heart when it was exposed to the environment outside of the sheltered cocoon she had formed around it.

But the woman began to realized that she could not shelter it forever. It need it to learn to survive the harsh elements in order to grow strong.

So with gentle care she gave it more space to grow, enough to allow it to expand his own unique shape but not so much for it to grow wild and untamed.

Sometimes she would lie in bed at night, feelings of inadequacy overwhelming her. She wondered if she was capable of handling the awesome responsibility placed in her.

Then she would hear the quiet whisper of the reassuring her that they knew she was doing her best. An she would fall asleep feeling comforted.

The woman grew more at ease with her responsibility as the years passed. The gift had enriched her life in so many ways by its very presence that she could no longer remember her agreement what her life had been like before receiving it, nor imagine what her life be like without it.

She had all but forgotten her agreement with the gods. One day she became aware of how much the gift had changed. It not longer had a look of vulnerability about it.

Now it seemed to grow with strength and steadiness, almost as if it was developing a power within. Month after month she watched as it became stronger and more powerful, and the woman remembered her promise, she new deep within her heart that her time with the gift was nearing an end.

With heartfelt gratitude she thanked the gods for allowing the privilege of watching over the precious gift for so many years.

Straightening her shoulders, she stood proud, knowing that it was, indeed a very special gift. One that would add the beauty and essence of the world around it and the mother let her child go.

I dedicate this to Jean ( the love of my life) with heartfelt gratitude for choosing me to be his mother and to God for providing me the gift of living to protect him and seeing become someone I know would share his light to this world. 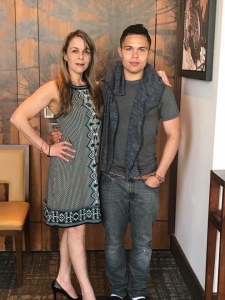