How do we short circuit that anxiety?

Above image shows a simplified view of the subtle body of Indian philosophy, showing the three major nadis or channels, the Ida (B), Sushumna (C), and Pingala (D), which run vertically in the body.

Let’s begin with what is a Nadi?

A nerve, blood vessel, also is a term (in yoga) for the channels through which, in traditional Indian medicine and spiritual knowledge, the energies such as prana of the physical body, the subtle body and the causal body are said to flow. Within this philosophical framework, the nadis are said to connect at special points of intensity, the chakras.

A simplified view of the subtle body of Indian philosophy, showing the three major nadis or channels, the Ida (B), Sushumna (C), and Pingala (D), which run vertically in the body.

The three principal nadis run from the base of the spine to the head, and are the ida on the left, the sushumna in the centre, and the pingala on the right.

Yoga philosophy states that is possible to restrain the involuntary alternations of ida and pingala and to unite these two separate streams of energy.

This is literally the meaning of Hatha yoga. Which is the yoga in which ha (the right breath) and tha (the left breath) are joined.

When these streams are united, prana is freed to ascend through the central channel of the spinal cord to its ultimate goal at the crown of the head (the sahasrara chakra). The initial stage of this is called the awakening of sushuma, which from my experience as yoga teacher and Reiki Master is the channel energetic clearing and connection to the Divine.

As mentioned above we can realize how effective our breath can become as a resiliency tool within our body. 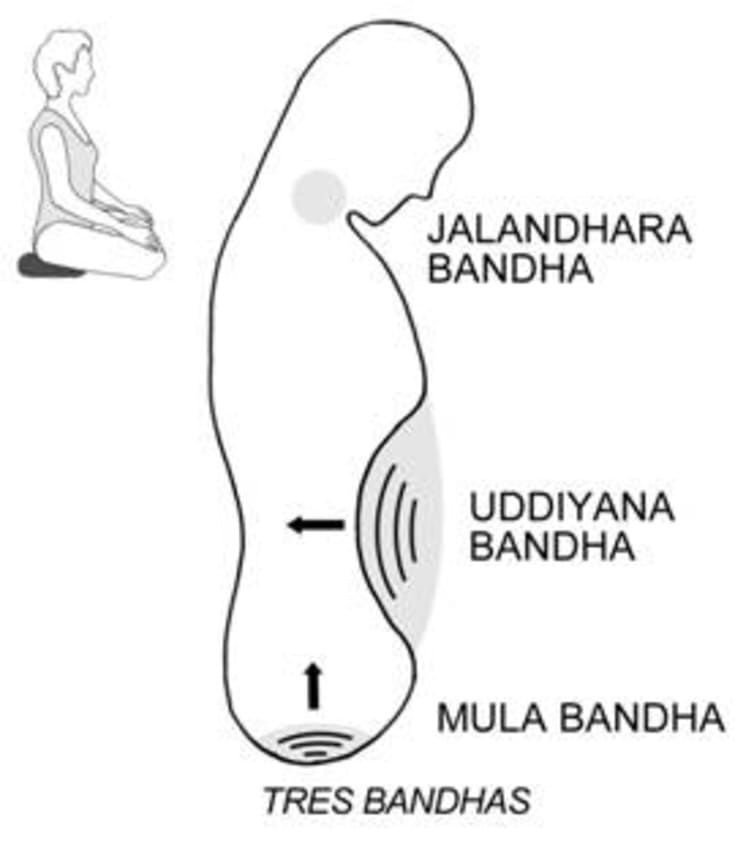 To enlist the body as a tool for the development of self-awareness various locks were described by tantric masters and later adapted by hatha yogis.

Three of these locks or bandhas:

The throat, stomach and root lock are fundamental practices of yoga that can be easily learned and eventually refined over a long period of practice.

The throat and root locks function in some respects to seal the upper and lower end of the spinal column.

According to adepts, the throat lock temporary prevents prana (acquisition of energy) from moving upward and restricts the flow of energy through ida and pingala.

The root lock blocks the downward movement of apana (elimination of energy)pulling this energy back toward the navel region.

When the upward and downward moving forces are thus blocked and forced into proximity with each other, then it is said that they function like two sticks being rubbed together: they produce heat. And this heat is magnified by the application of the stomach lock (uddiyana bandha).

The concentration of energy increases with practice, and it is said that a striking phenomenon eventually takes place: in very advanced practitioners the intense heat created by the locks, coupled with retention of the breath, awakens awareness and leads it upward along the central path of the spine. It moves from the base of the spine toward its upper pole, from fear and instinctively craving to illuminated self-awareness (samadhi), which is the goal of yoga.

The following three images will help you practice these locks while the above illustration demonstrates how during a variation (with a bind) of revolved side angle pose the three bandhas are engaged.

Mula Bandha is stabilizing and calming. It also enhances the energy of concentration.

This energetic bonding accompanies both pranayama and meditation, and it provides continuity when breathing practices are completed and meditation begins.

Let’s look at the system of energy that supports the body and mind in order to give perspective to Svatmarama, author of the authoritative Hatha Yoga Pradipika (Light on Hatha Yoga), when he stated “There is no doubt that by practicing mula bandha total perfection is attained.”

The command center of prana is the spinal column, which rises from the perineum to the base of the skull. Within this axis is said to be a central channel of energy (nadi) called sushumna.

Two other passages of energy, known as ida and pingala (as showed in the above image of a seated person) are described as twining upward along the spine from its base, ending in the left and right nostrils respectively.

In ordinary life these two nadis dominate a complex even hierarchical network of energy pathways. Just like our nervous system where both sides are interdependently connected.

In yogic physiology, left nostril breathing is associated with the parasympathetic nervous system which is active when one is calm and relaxed.

It releases a chemical called acetylcholine which induces a state of well being, pleasure, etc.

Activation of the parasympathetic nervous system tends to slow the heart beat and cause blood vessels to dilate and relax (with the exception of the coronary vessels where it causes constriction).

It causes the pupils of the eyes to constrict. It causes salivary secretions as well as secretions of sweat and gastric juices.

Most interesting of all, parasympathetic activation is associated with an increased degree of sensitivity to telepathy.

Researchers found repeatedly that pranayama, apart from inducing a more healthy feeling in the individual, actually increases telepathic and other higher mental functions.

They have also shown that if you practice concentration or meditation you will have greater success if you precede it with pranayama.

The sympathetic nervous system is particularly active when we experience strong emotions or when we are engaged in some physical work.

It is the other part of the autonomic nervous system, activated by adrenaline secretions in the body. Its functions are generally opposite but complementary to those of the parasympathetic nervous system.

The sympathetic accelerates the heart, causes blood vessels to constrict, the coronary vessels and the pupils to dilate.

It inhibits secretions of the salivary glands, sweat glands and gastric juices. It also causes inhibition of the gastrointestinal tract.

These functions are precisely those which occur with right nostril breathing.

It has also been demonstrated that oxygen ions (02) slow respiration, lower blood pressure, increase mental alertness and feelings of well being, and also increase the action of cilia (hairs) in the respiratory passages.

There is a direct correspondence between the states associated with the activation of ida, pingala and sushumna nadis and the parasympathetic, sympathetic and central nervous systems respectively.

When we breathe in through the left nostril, ida nadi or the parasympathetic nervous system as well as the right hemisphere of the brain are stimulated.

When we breathe in through the right nostril, pingala nadi or the sympathetic nervous system as well as the left hemisphere of the brain are stimulated.

When the breath is equalized through both nostrils, the brain and the sympathetic and parasympathetic systems are balanced.

Keep in mind to always approach your physician before practicing any of these bandhas. In particular the practice of these locks should not be done if you have:

• an ulcer in your stomach or intestine

• or recently had any other abdominal illness or trauma

When we find ourselves in balance our emotions and actions synchronize in harmony bringing us to the present moment. Allowing us to look towards the past in gratitude for the lessons learned and embrace an uncertain future with confidence and self-love.